Ryne reached his hand up to scratch his cheek, then caught himself and resisted.  He hadn’t had time to shave before heading out that morning on the seven-hour drive up to the man’s estate.  He glanced around the display room.  The man he was meeting was a private collector of artifacts.  And Ryne was waiting in what appeared to be a preparation room of sorts.  The man had the skeletal head of some dinosaur lying on the ground on a plastic sheet.  On the same sheet were some tools like brushes and something that looked like the tool dentists use to scrape tartar off teeth.  On a nearby wooden work bench was one of the original prop ray guns used in that popular 70’s science fiction adventure show that Ryne used to watch with his grandfather when he was a kid.  He wondered what his grandfather would make of the place.  Gramps never did approve of private collectors.  As a young man, Ryne’s grandfather had come across some rare artifacts while on holiday.  He could have legally kept them and sold them, but he chose to donate them to a local museum.

He had instilled in Ryne a love of museums and old artifacts, a respect for the past and those who came before.  Ryne ignored the items in the work room.  He had come for a rarer treasure.  A myth come to life.  That was his specialty.  It was his passion.  It was his life’s work.  And in this particular case, he had another reason for wanting the artifact he sought.  For he had a promise to keep.  He’d been seeking the artifact for almost five years.  The Shield of the Rainheralds. END_OF_DOCUMENT_TOKEN_TO_BE_REPLACED 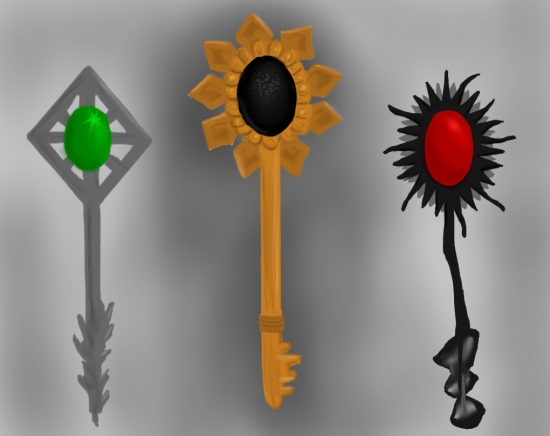 “They were known as the Queens of Time,” Gramps said.  “There were three of them, one for each of the keys.”

Ryne looked forward and up to where his grandfather pointed.  On the wall was a small glass case and mounted inside were three ornate keys.  They looked similar, though the designs were slightly different.  Each key was made of metal with a polished oval stone set in the middle.  One stone was red, like coral or jasper.  Another was green like jade.  And the third was black, like onyx or obsidian. END_OF_DOCUMENT_TOKEN_TO_BE_REPLACED