“Obviously, it’s a hoax,” Rita said, switching out the microphone cover for that furry one that she used when they went somewhere windy.  “But can you imagine if it were real?  I mean what would it mean?”

Quentin sighed.  “It would mean that Nature herself is against my ever getting a real shot at doing real journalism.”

“So, pigs can fly and somehow that’s all about you, huh?” END_OF_DOCUMENT_TOKEN_TO_BE_REPLACED 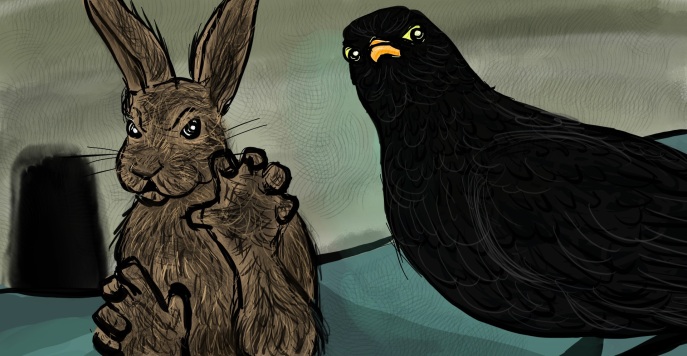 He continued walking along as the little black bird flapped around him.  She landed on a nearby branch.

“I’ve heard that you’ve seen the world from above as a bird does when she’s flying.  Is that true?  How did you do it?  It can’t be true.  But is it true?”

Starling was young and eager.  But she was also persistent.  And she was also perceptive.   She noted the smile on Tortoise’s face.  She understood what it meant.  He had expected her to grow tired of asking him the same questions day after day.  But she had done so for five days now.  Perhaps he would deem her worthy enough to deserve some answers to her questions. END_OF_DOCUMENT_TOKEN_TO_BE_REPLACED 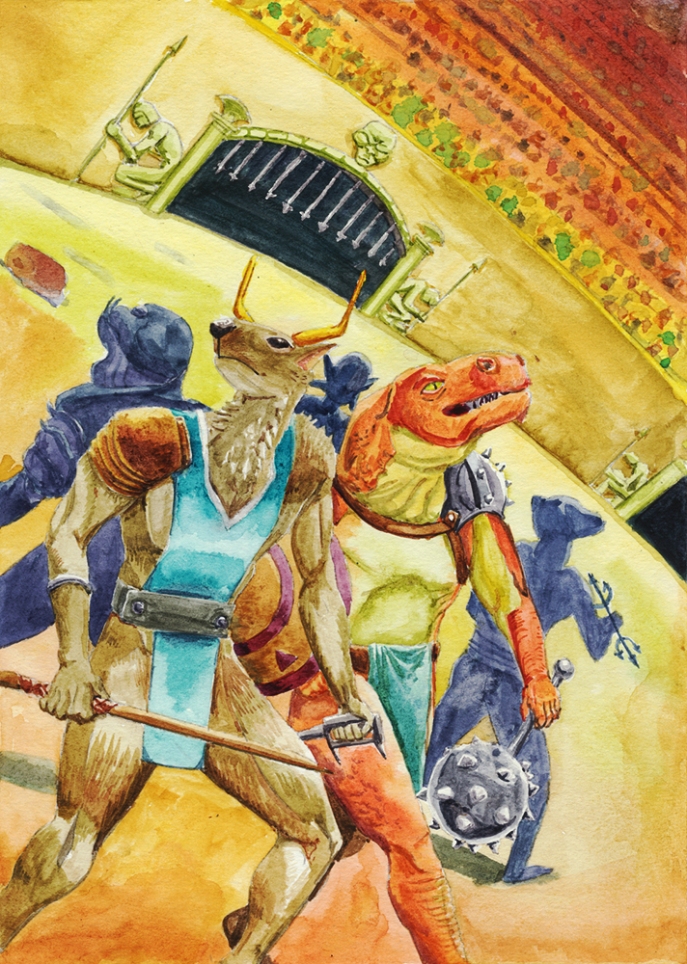 They all watched as the one called Yellowjaws was taken to the edge of the arena. He limped from a vicious gash along his lower left leg that still seemed to be seeping blood. His long fur was matted with blood, dust, and his own thick spittle. He stopped and turned to them. He had been neither loved nor reviled. In that moment, he was—by most—envied. For as they watched, the fur fell away from his form, leaving behind pale brown skin that would certainly darken to a natural bark brown under the sun. His snout, along with the double rows of jagged yellow-orange teeth by which he was named, began to shrink. His whole head shrunk somewhat. His face and head were bare, but in time, something would grow there. Not fur, but hair.

At the base of the tower, I have grown vines studded with thorns as long as my arm.  Not the dainty thorns of thistle or rose.  But deadly thorns like skewers.  Thorns that grow thorns of their own.  There is no way to climb through them without getting tangled and pierced.  Many a woodland creature have become mired.  I cannot free them.  I can only end their misery and watch as the vines devour them until only bones are left.  It is useless to chop through the vines.  For when they are culled, they grow back within a few heartbeats, thicker than before.  I am protected.  I feed the plant with my own blood.  A drop a day suffices.  For I am no woodland creature.  My blood is full of nourishments beyond that known to beast or man.  My body is a channel for greater powers.  I was not told before I ran away to my tower what I am.  I brought the knowledge with me.  I gathered it as I wandered.  I gathered herbs and I gathered books.  I gathered leaves and dirt and rain.  I gathered powders and tinctures and metals and stones.  One day as a heavy rain fell outside and as my candles flickered, I read the word that my family tried to hide from me.  The word that told me what I am.

Ryne reached his hand up to scratch his cheek, then caught himself and resisted.  He hadn’t had time to shave before heading out that morning on the seven-hour drive up to the man’s estate.  He glanced around the display room.  The man he was meeting was a private collector of artifacts.  And Ryne was waiting in what appeared to be a preparation room of sorts.  The man had the skeletal head of some dinosaur lying on the ground on a plastic sheet.  On the same sheet were some tools like brushes and something that looked like the tool dentists use to scrape tartar off teeth.  On a nearby wooden work bench was one of the original prop ray guns used in that popular 70’s science fiction adventure show that Ryne used to watch with his grandfather when he was a kid.  He wondered what his grandfather would make of the place.  Gramps never did approve of private collectors.  As a young man, Ryne’s grandfather had come across some rare artifacts while on holiday.  He could have legally kept them and sold them, but he chose to donate them to a local museum.

He had instilled in Ryne a love of museums and old artifacts, a respect for the past and those who came before.  Ryne ignored the items in the work room.  He had come for a rarer treasure.  A myth come to life.  That was his specialty.  It was his passion.  It was his life’s work.  And in this particular case, he had another reason for wanting the artifact he sought.  For he had a promise to keep.  He’d been seeking the artifact for almost five years.  The Shield of the Rainheralds. END_OF_DOCUMENT_TOKEN_TO_BE_REPLACED