“Before you kill us,” the philosopher said, standing before fangs dripping with searing venom and six pairs of blazing eyes, “let us ask you a question.”

The philosopher felt her heart beating within her chest.  She winced at the feeling.  It was not painful.  Just sad.  Her heart knew this was the moment of her death and it was still aching to keep her from it.

All six of the creature’s eyes were on her, but she was most directly in front of one pair in one giant dog-like head.  She knew this one’s name.  This one was Lucte.  The name meant “grief.”

END_OF_DOCUMENT_TOKEN_TO_BE_REPLACED

Lucinda held her breath, as she raised the glass rod above the vial and tapped the rod to release the single drop of liquid that clung to its end.

The drop fell in the vial, joining the muddy liquid within.  The liquid turned ruddy, then clear.  And it stayed clear.

Lucinda dared to exhale just as the liquid began to swirl and turn ruddy, then muddy.  She ducked under the table just before the vial shattered, spraying red flames and charred bits of glass in every direction.

END_OF_DOCUMENT_TOKEN_TO_BE_REPLACED

Who can withstand the cudgel and sword?
Only the men of the Gingerbread Guard.

END_OF_DOCUMENT_TOKEN_TO_BE_REPLACED 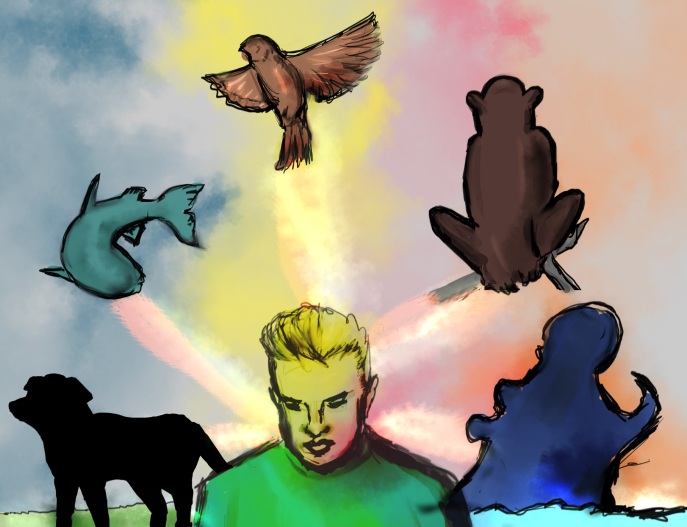 Panofus spoke the last words of the spell and flicked his raised fingers in the proper precise configurations.  As he did, another sudden quake struck the tower.  And the room filled with gasps and cries of fear.

One of the children in the group of unpracticed mages standing before Panofus pulled away from the old woman who was holding him.

“What about you?” the child asked just as he began to fade from view. END_OF_DOCUMENT_TOKEN_TO_BE_REPLACED 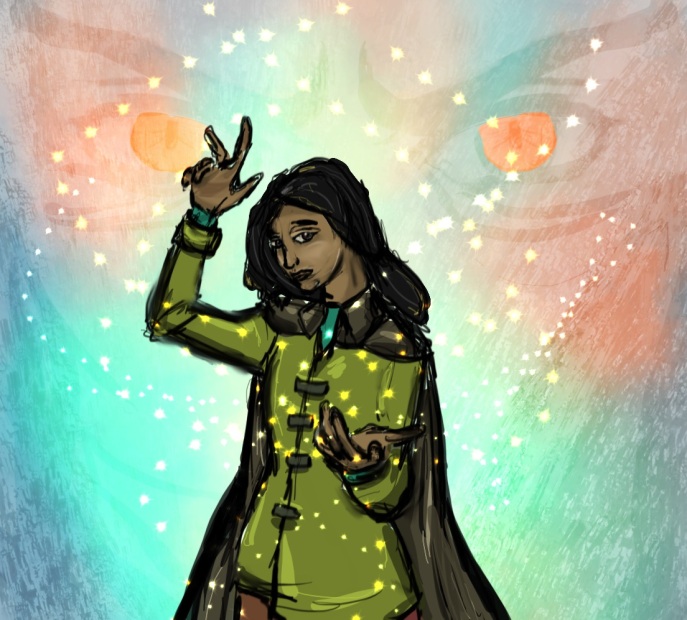 When Sona first came upon the velvet sack lying just beside the road, she almost passed it by after a quick and curious glance.  But with a sigh, she veered off the path and knelt down to inspect the sack.  It was partly hidden beneath a bush, and the velvet was the color of leaf and dirt, so it was no wonder that another traveler had not yet found it and picked it up.  She lifted the sack and checked it for markings, a monogram or crest stitched into the fabric, or perhaps something a bit more subtle.  With one hand, she raised the sack, as she waved the other before her eyes, casting a lensing spell that would allow her to see any magical markings upon the sack. END_OF_DOCUMENT_TOKEN_TO_BE_REPLACED 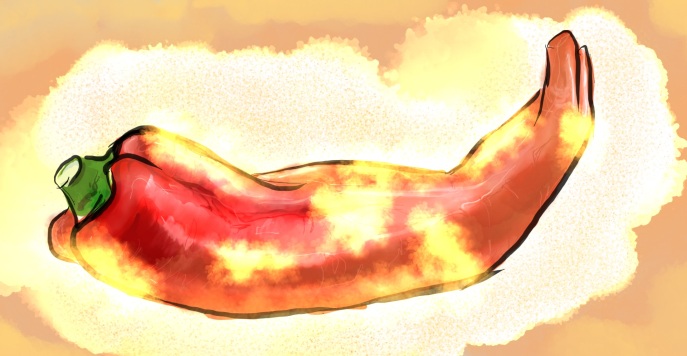 They say he did it because he asked to sit by an innkeeper’s fire one night and was denied with a lie.  The innkeeper said that there was “not enough fire” to warm the man who was dressed in rags and filth.  He appeared to be a beggar, but he was not a beggar.  He was a warlock.  And he was none too pleased by the innkeeper’s response.  It was no surprise that he should cast a curse.  What was surprising was that he did not just cast the curse on the innkeeper himself, but on the innkeeper’s entire country. END_OF_DOCUMENT_TOKEN_TO_BE_REPLACED 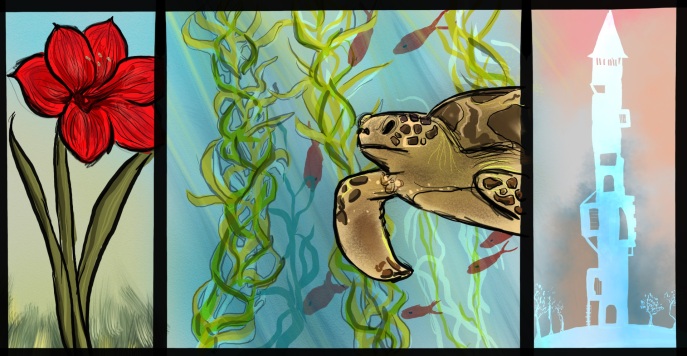 When I was born, a clever mage, who was also my mother, made for me a triptych: three panels, attached in a row by hinges, depicting paintings of our home.  The middle panel depicted our capital city, where we lived.  The left panel depicted my mother, her hands raised as if in the casting of a spell.  The right panel depicted the Arx, the great tower of knowledge where mages learned their trade.  The flanking panels were each half the width of the middle one, so they could be folded inward, and the image could be hidden.  And strangely, my mother had built a lock into the triptych.  Once folded, the triptych could be secured.  I did not know why it would need to be locked.  There were no secret or blasphemous things depicted in the paintings, as far as I knew. END_OF_DOCUMENT_TOKEN_TO_BE_REPLACED 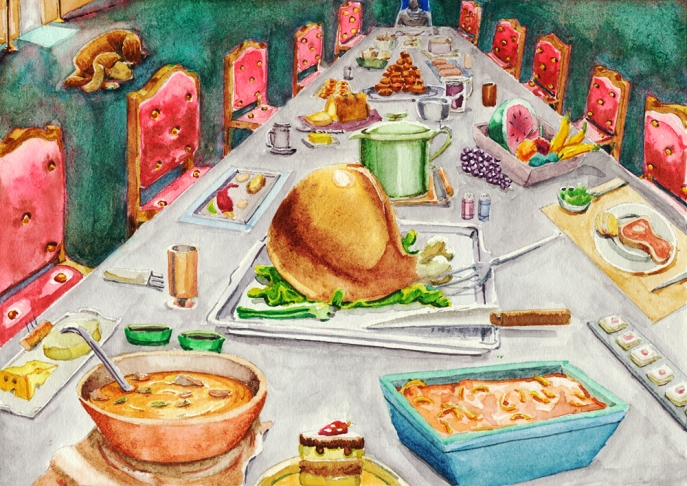 The king is the hound and the hound is the king.
The feasters come and eat, but they don’t suspect a thing.
It’s a feast like none they’ve seen, a spectacular repast.
They never e’er suspect that the meal will be their last. 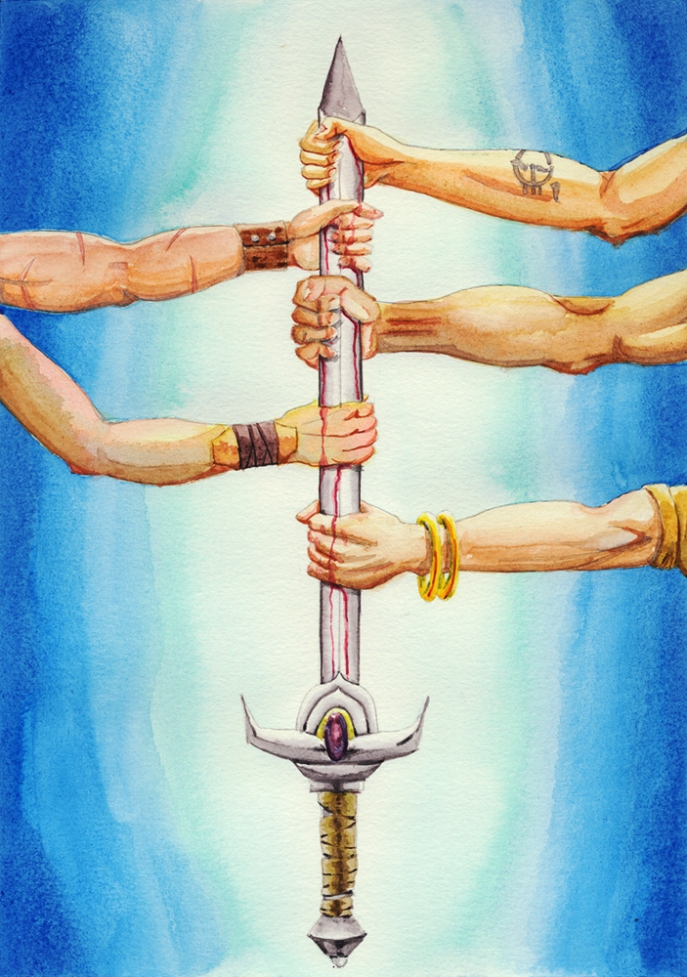 “There is no cure,” the baker said as she peered into the mage’s eyes. END_OF_DOCUMENT_TOKEN_TO_BE_REPLACED I found it when I was doing my yearly “let’s look through all my stuff and see what I still care about and what I can let go.”  Such a mundane activity.  So, fathomable.  I stopped to reminisce about a few of the photos, journals, letters and the like.  There were some precious items that were worn from over three decades of existence and yet were keepers.  And some items that I couldn’t remember why I’d kept and that I gladly put in the donate-or-recycle pile.  But then, tucked away in a black briefcase bag I was clearing out for donation, I found a dried out stick.  My lucky stick.   END_OF_DOCUMENT_TOKEN_TO_BE_REPLACED